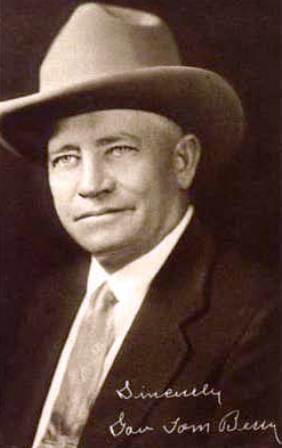 South Dakota’s “cowboy governor” Tom Berry was elected in 1933 with more than a 37,000 vote margin and served until 1937. Working for the reduction of state expenditures and abolition of the state property tax in favor of a state income tax, Governor Berry called special legislative sessions to adopt unemployment insurance and license the sale of wine and beer, an effort to increase state revenues. Tom Berry was known for his dry wit, and his often cited depression-era edict, "No work, no eat" went hand in hand with his efforts to channel millions of federal relief dollars to projects around the state.

Thomas Matthew Berry was born on April 23, 1879 in Paddock, Nebraska, the fifth of ten children born to James Baxter Berry and Cynthia Ann Ross. After moving to South Dakota in 1897 he homesteaded, worked as a ranch hand, and eventually became one of the first settlers of Mellette County, with his wife, Lorena McLain Berry, and their four children.

Tom Berry described his early years in a 1933 interview with the Deseret News: “My mother and father were early pioneers. They crossed the Missouri River settling along the northern line of Nebraska … My father always said, ‘Boys make your work good, don’t steal and don’t lie.’”

As a rancher, Tom experimented with cattle cross-breeding and the introduction of new grasses. With two of his brothers he once sold two million pounds of beef on the hoof, one of the largest livestock transactions in South Dakota history. By the thirties, Tom’s ranch, operated as a partnership with his two sons and a son-in-law, spanned 30,000 acres.

An active member of his community, Tom promoted better schools and improved roads. He was elected to the South Dakota state legislature in 1924, serving three two-year terms before entering the gubernatorial race as a Democrat with a fair-tax message for state voters. He was rarely seen campaigning without an ax in hand, pledging to “take an ax to the state budget,” which was his campaign slogan representing his conservative philosophy.

Berry was defeated for a third gubernatorial term in 1936 and for a U.S. Senate seat in 1942. In 1942 he was appointed director of the Omaha district of the Farm Credit Administration, serving in that position until 1947. He was also president of the "Cowboys of 1902," riders who took part in the last major roundup on the prairies of western South Dakota.

Governor Berry died on October 30, 1951. In 1962 he was inducted into the National Cowboy & Western Heritage Museum’s Hall of Great Westerners.