Information about and resources related to the Freemantown community in Floyd County, Georgia 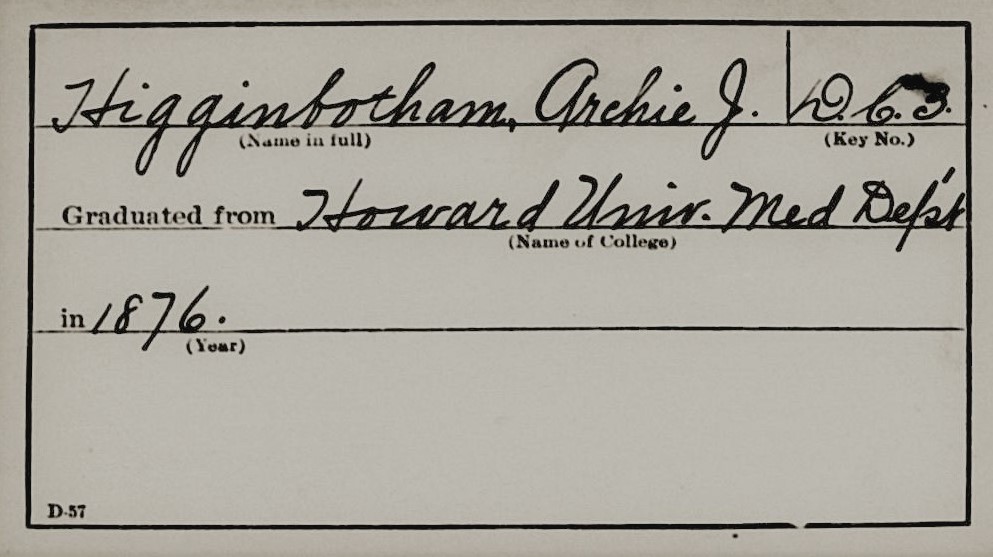 Dr. Archie J. Higginbotham was the Black Rome physician who treated Thomas Freeman, visiting “almost daily” during the year before Freeman's death in 1893.

Higginbotham grew up in Rome, the son of William Barton Higginbotham, a free man of color born in Virginia who moved to Rome in 1845, where he was a prosperous saloon operator at Rome’s Choice House hotel. David T. Dixon writes that during the U.S. Civil War, Higginbotham’s wife and children were enslaved by Dr. Homer V. M. Miller, a surgeon in the Confederate 8th Georgia Regiment. Miller agreed to sell Higginbotham’s children to their father on the condition that he serve as Miller’s personal servant on the battlefield. Higginbotham did so and purchased his children in 1862 (he was not allowed to purchase his wife).

A.J. Higginbotham was one of those children, born in 1853. He attended preparatory school and college at Atlanta University, and in 1876 graduated from the Howard University College of Medicine, less than ten years after its founding. Shortly after graduation Dr. Higginbotham moved to Mississippi, where he and Roxie Maud Turner were married in December 1877. In the 1880 Census, Archie, Roxie, and their 11 month old daughter Theresa live in Raymond, near Jackson, Mississippi.

It isn't clear when the Higginbothams returned to Rome. Dr. Higginbotham is on the 1890 property tax rolls, with property valued at $178. In the 1900 Census, the family - Archie and Roxie with daughters Theresa, Mable, Wilma and Sunbeam and sons Charles and Percy - live at 15 North Boundary Street. By the 1910 Census, Roxie and daughter Sunbeam are listed at 1121 North Broad Street, where members of the family continue to reside into the 1930s. The Directory of Deceased American Physicians lists Dr. Higginbotham's approximate death date as December 31, 1929. Roxie Turner Higginbotham died in Atlanta on February 16, 1930; she is buried at Myrtle Hill Cemetery in Rome.

Sources on W.B. and A.J. Higginbotham

Primary sources are typically historical in nature and may contain racial, gender, sexual, religious, and other language and imagery that are harmful and offensive by today's standards.