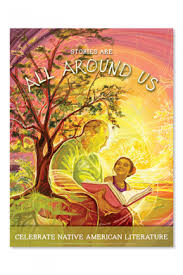 Natalie Diaz was born in the Fort Mojave Indian Village in Needles, California. She is Mojave and an enrolled member of the Gila River Indian community. She earned a BA from Old Dominion University, where she received a full athletic scholarship. Diaz played professional basketball in Europe and Asia before returning to Old Dominion to earn an MFA. She is the author of the poetry collection When My Brother Was an Aztec (2012), which New York Times reviewer Eric McHenry described as an “ambitious … beautiful book.”  -- Poetry Foundation

Cherokee poet, scholar, and activist Qwo-Li Driskill grew up in rural Colorado. Driskill earned a BA from the University of Northern Colorado, an MA from Antioch University Seattle, and a PhD from Michigan State University. Driskill’s poetry engages themes of inheritance and healing, and is rooted in personal Cherokee Two-Spirit, queer, and mixed-race experience. Walking with Ghosts (2005), Driskill’s first poetry collection, was named Book of the Month by Sable: The LitMag for New Writing and was nominated for the Griffin Poetry Prize. -- Poetry Foundation

Joy Harjo is the first Native American to serve as the Nation's Poet Laureate – she is an enrolled member of the Muscogee Creek Nation. Librarian of Congress Carla Hayden, who appointed Harjo to the position in June, 2019, says that Harjo's poems tell “an American story of tradition and loss, reckoning and myth-making. Her work powerfully connects us to the earth and the spiritual world with direct, inventive lyricism that helps us reimagine who we are.”

Daniel H. Wilson is a Cherokee citizen and author of the New York Times bestselling Robopocalypse and its sequel Robogenesis, as well as How to Survive a Robot Uprising, The Clockwork Dynasty, and Amped. He earned a PhD in Robotics from Carnegie Mellon University, as well as Masters degrees in Machine Learning and Robotics. His latest novel is an authorized stand-alone sequel to Michael Crichton’s classic The Andromeda Strain, called The Andromeda Evolution. Wilson lives in Portland, Oregon.