Women in the Early Years of the Berry Schools: Martha Freeman 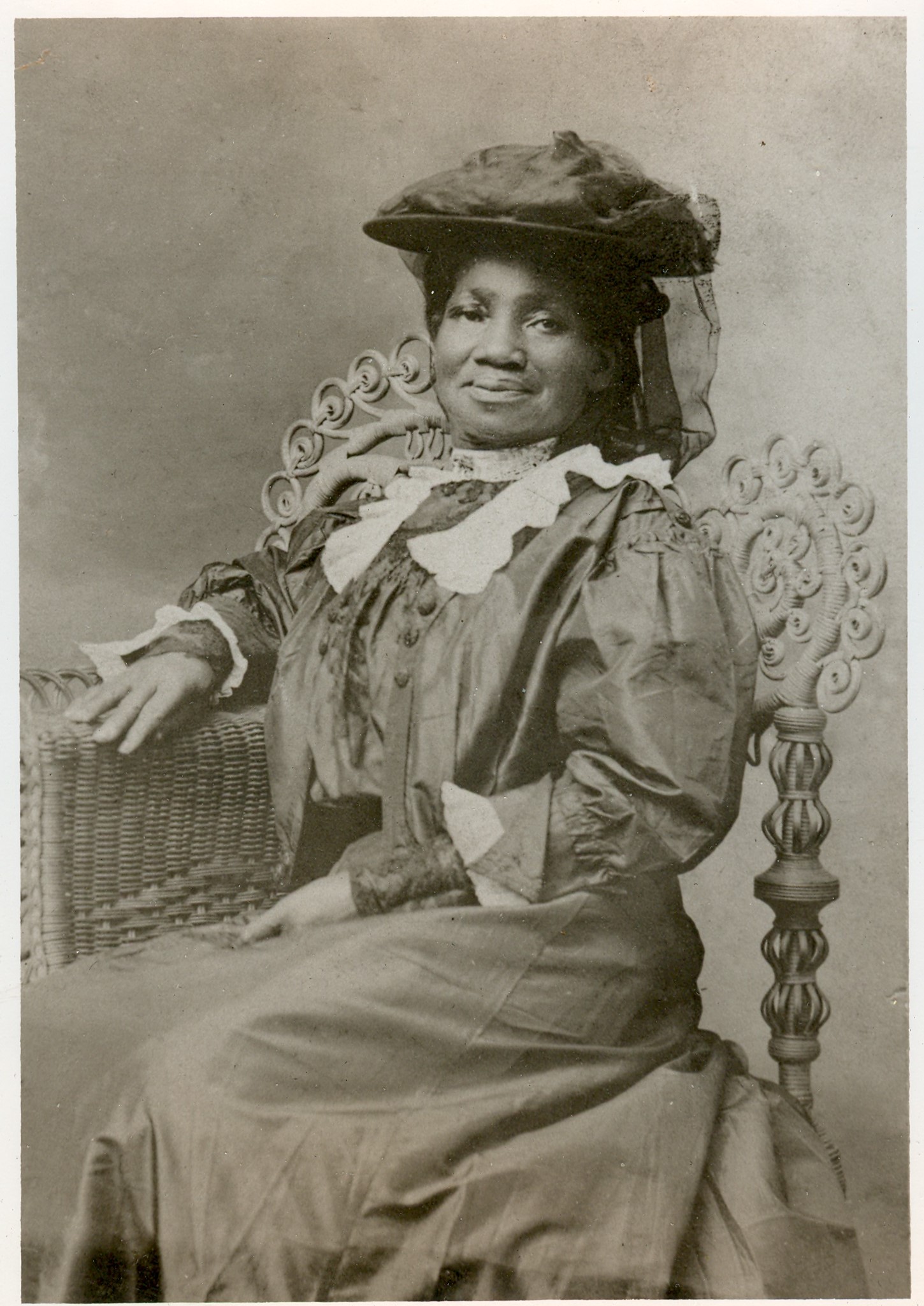 The earliest reliable source that gives information about Martha Freeman is the 1900 US Census, which lists her and three other African American men and women as servants in the home of Thomas Berry. Thomas’s daughters Martha, Laura, and Frances, as well as his son Thomas, are also enumerated as members of the household in Rome’s 919th Militia District. In this Census, Martha Freeman is listed as age 45, born in Georgia in May 1855. Described by the Census enumerator as a “house girl” Martha Freeman cannot read or write, is the mother of seven children, two of whom are living, and is a widow married for 20 years.

A record that we believe relates to Martha Freeman is a listing in the 1880 US Census for Enoch Freeman and his wife Martha. Enoch Freeman, 45 (therefore born in about 1835), works on a farm, is able to read and write, and was born in Georgia. This Martha Freeman is a 40-year-old laundress (approximate birth year of 1840), unable to read or write, born in Georgia. The couple lives in Rome’s 919th Militia District.

Other census records provide more details. In 1910 Martha Freeman is a 68-year-old widowed servant in the home of Frances Berry (Martha Berry’s mother), a cook who can neither read nor write. In 1920 most of the details are the same, but her age is given as 68, yielding an approximate birth date of 1852. In 1930, Martha Freeman is listed as a widowed 85 year-old (born about 1845) retired servant in the home of Martha Berry, at the Martha Berry School for Boys, age 20 at her first marriage. This is the last census record for Martha Freeman – she is not included in the 1940 enumeration of the Berry Schools.

Bonnyman provides confirmation that the couple in the 1880 census is correct: “Uncle Enoch, the carriage driver, was Aunt Martha’s husband. They lived in a small two-room cabin on what is now a part of the front campus of the Berry School. My father had given this property fronting on the Summerville Road [now the Martha Berry Highway] to Martha Berry and she donated it to the School.” Bonnyman’s account of Martha Freeman’s children is partially consistent with the 1900 census: “Her daughter, Frances, died in child-birth, as did the child. She had been named for my mother. One son, Burrell, ran away from home and was murdered on a railway job in Alabama. Simon, the eldest son, was a house-boy for some time at Oak Hill. Upon a recommendation from my mother, he secured a good job as a butler in Chattanooga.” After Enoch Freeman’s death “She moved into what had been the ‘Schoolhouse' … there she lived until her death.”

The Rome News published Martha Freeman’s obituary on May 16, 1951, stating that “'Aunt Martha’ Freeman died late yesterday on the Berry Family estate, Oak Hill, near Rome. Her life ended in the small cottage near the Berry family home where she had spent practically her entire life. In announcing her death today, college officials placed her age at 107, the lowest of estimates ranging up to 115. By her own count ‘Aunt Martha’ would have been 111 this year.” The Georgia Death Index confirms this information, giving Martha Freeman’s approximate birth date as 1844, making her 107 years old at her death on May 15, 1951.

Sources from the Berry College Archives

Note that these documents may contain offensive language. 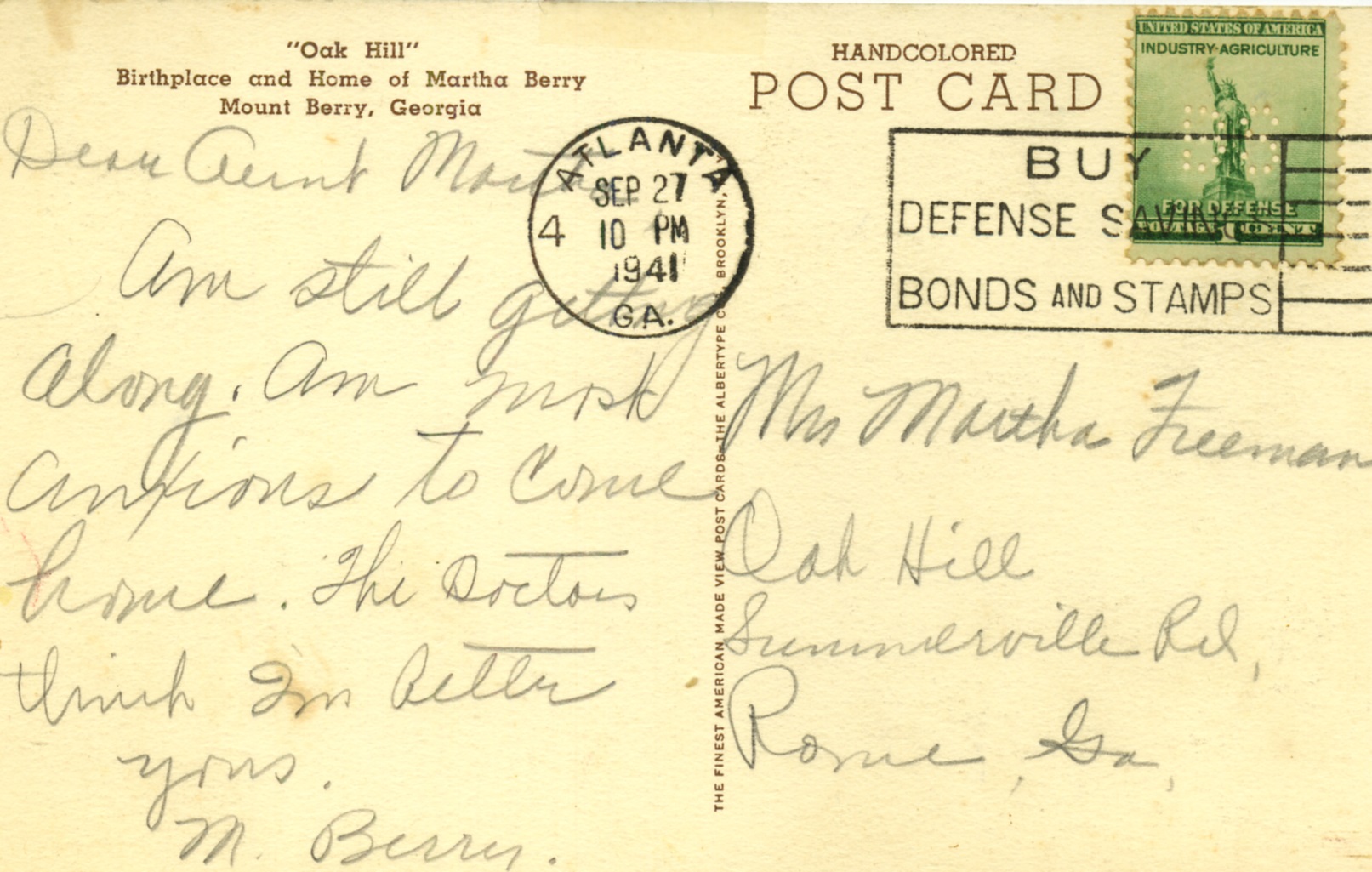 Letters to and about Martha Freeman span the years of Martha Berry's correspondence, from 1926 until 1941, a year before Berry's death. In addition to notes and letters to Martha Freeman, Berry reports on Freeman's health and activities to family, friends and benefactors including Emily Vanderbilt Hammond, Margaret Fitzhugh Browne, Frances Berry Bonnyman, and Kate Macy Ladd.

Note that many of these letters contain offensive language.

"Aunt Martha told me she came to live with Miss Berry when she was sixteen years old and Miss Berry was 2."

"She [Martha Freeman] has had to have an eye operation and is now completely blind, and has a trained nurse with her all the time."

Inez Wooten Henry, August 1952 (born in 1905 in Worth County, Georgia and came to the Girls School in 1918; after her graduation in 1921 she became Martha Berry's assistant until Berry's death):

"I saw her yesterday and found her as well as usual, and deeply interested in the affairs of the world. She listens to her radio regularly, and keeps an ear to the ground to know what is going on at the school. She is very definite in her opinions about how the nation and the school should be run."