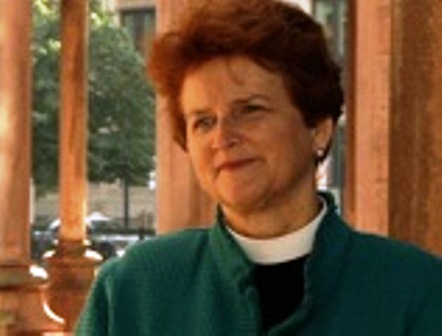 Anne Berry Bonnyman: Trailblazer for Women in the Episcopal Church

Anne Bonnyman was one of the first women ordained in the Episcopal Church in Tennessee and led congregations in Tennessee, Delaware and Massachusetts during her many years of parish ministry. She was the first woman rector of Trinity Church in Wilmington, Delaware and Trinity Church on Copley Square in Boston, historic downtown churches. In Wilmington as her church became increasingly multi-cultural, she became an advocate for immigration and other social justice issues. She went on to Trinity Church in Boston and led one of the largest Episcopal parishes in the United States, celebrating both tradition and innovation in Episcopal worship and leading the creation of an anti-racism study and prayer group. Trinity’s junior warden Alexandra A. Burke called her "A clear voice for social justice … a leader beyond Trinity's walls.''

A native of Knoxville, Tennessee, Anne was raised in the Roman Catholic Church and joined the Episcopal Church as a young adult. She entered seminary in September 1979 and was ordained at St. David’s in Nashville in 1982. In addition to the Master of Divinity degree from Virginia Theological Seminary, Anne holds a Master of Arts in Religious Studies from Villanova University, and a Bachelor of Arts from the University of Tennessee.

About her faith journey, she says: "One of the things I love most about the Episcopal Church is that we are curious and do not shrink from intellectual inquiry. Our faith is in God's ongoing revelation." Anne is now living in Asheville, North Carolina where she pursues a lifelong avocation in painting, volunteers as a guardian ad litem in the North Carolina courts, and sings in a women’s chorus. She has three sons: Gordon, John and Alex Lippincott.