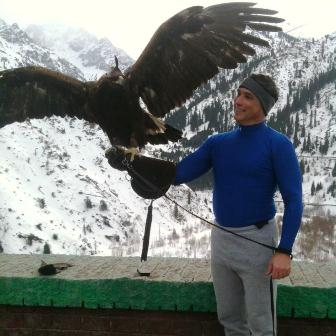 Matthew Johnston is one of four boys and comes through the Bessie Berry/Moses Wright line. He works for the State Department as a U.S. diplomat overseas. Matt and his family have lived in Central America, Eastern Europe, and now reside in Almaty, Kazakhstan (Central Asia).

He has over 25 years of professional experience ranging from public accounting (Ernst & Young), private sector (Fortune 500), and now with USG, having spent some time working in nearly 40 countries (nomad comes to mind). Matt is a CPA, earned an MBA the hard way at night school while working with family, and enjoyed his stint in the Navy Reserves. Matt's daughter Amanda will graduate high school in Almaty this year and is setting her sights on college next fall. Her older brother, Matthew, attended Berry for two years and transferred to a program in Prague, Czech Republic, where he plans to double major in International and Economic Relations/Business Administration.

Matt commented, “The last crazy thing I did was run a marathon on the Great Wall of China. I recall my daughter just ‘rolling her eyes’ after seeing firsthand how crazy this idea was, and my son saying, ‘Dad, better you than me.’ My son and I plan to run a marathon together this May in Prague.”

See Matt on Facebook - his email is: mwjohnston82@gmail.com.  He also posts short videos of travel adventures from time to time on YouTube, as, he says “a great cure for those who suffer from insomnia”. Go to YouTube, search "MrKansas99"... there will be a list of videos he’s posted (e.g. Masi Mara Safari, Cairo-Jan 2011 Arab Spring, Red Sea Scuba Diving, Kyrgyzstan Mt. Climb, and China Marathon..."