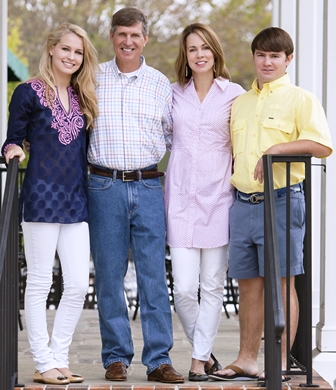 Kevin Kelly, and his mother, Betty Kelly, established Kevin's Fine Outdoor Gear and Apparel in 1973. Kevin, Betty, and Kevin’s wife Kathleen are actively involved in the daily operations of Kevin's Catalog and the two company stores, Kevin’s of Thomasville, Georgia, and Kevin’s Guns and Sporting Goods in Tallahassee, Florida. Kevin’s was named 2007 Retailer of the Year by SHOT Business Magazine, a firearms industry trade magazine. The award goes to the “shooting sports retailer that has displayed an exceptional commitment to the promotion of the shooting sports, the preservation of our hunting and shooting heritage, and the protection of our firearm freedoms.”

Kevin & Kathleen Kelly, with their family.