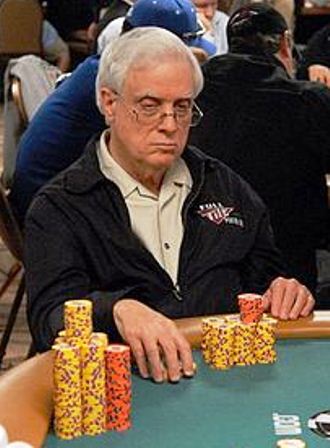 Berry Enfield Johnston is best known as the 1986 World Champion of poker, but he has also won four other bracelets at the World Series of Poker. He was inducted into the Poker Hall of Fame in 2004.

Born in Oklahoma in 1935, Berry started playing poker in 1970. He moved to Las Vegas and finished third in the 1982 World Series of Poker Main Event. Having cashed in at least one World Series event every year from 1982-2010, Berry holds the record for longest streak at 29 years. Johnston also played on the NBC Poker After Dark, online as a representative of Full Tilt Poker, and as a poker ambassador for the Oklahoma-based Cherokee Casino chain.

Berry Johnston has a reputation as a gentleman at the tables, taking the good as well as the bad with composure, as well as in his private life. At the 2004 Poker Hall of Fame induction ceremony, poker legend Doyle Brunson described Berry: “What I admire most about Berry is not Berry the great poker player, but Berry the man. He is a deeply religious and devoted family man, who has always been a gentleman at all times.”