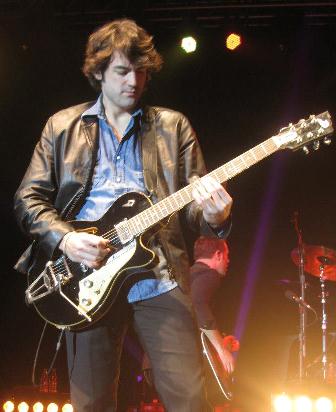 Johnny Duke Lippincott (aka "Johnny Duke") was born in Knoxville, Tennessee in 1988. By the age of eight, he was frequently traveling back and forth between his father's home in Mississippi and Wilmington, Delaware, where he lived with his mother and went to school. By the time he was 14, Duke was sitting in on guitar with local blues musicians at festivals and small clubs around the Mississippi Delta. During his time spent in Delaware, Duke got to know Wilmington musician David Bromberg, and began sitting in with him. In 2004 Bromberg called Duke “as good a blues guitar player as any I've ever played with, and I've played with some really good guitar players. That's John Lippincott. He's a killer!"

At Berkelee College of Music, where he was a professional music major, Duke earned a scholarship from D'Addario Strings for outstanding achievement and was selected to play in the college's Jazz/Blues and Pop/Rock Guitar concerts. Duke led Wilmington band Johnny Duke & the Aces before moving to Nashville.

Johnny has developed a career of balancing the role of being a sideman and a frontman. He has toured with Ashley Monroe, who joined him for a vocal duet on the track Love Me One More Time from Johnny's debut album Reimagine, released in the Spring of 2016.  Other artists he has shared the stage with over the years include Vince Gill, Mary Chapin Carpenter, Lee Ann Womack, Sheryl Crow, Miranda Lambert, Chris Isaak, Chris Stapleton, Jerry Douglas, and Don Was.  When he is not on the road touring, Johnny works out of his recording studio in East Nashville, Spirit Radio Studio, producing both his own music and music for other artists and bands.

Today, Johnny is balancing touring with artists such as Ashley Monroe and Mary Chapin Carpenter, and Lee Ann Womack with producing and performing his own music.