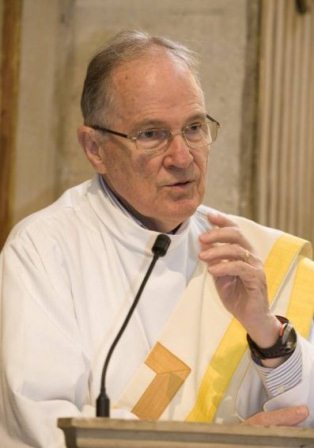 In 1995, Robert McKeon moved to Paris where he was ordained Permanent Deacon in the Roman Catholic Diocese of Paris. Since then he has served at the Eglise Saint Louis en l’Ile where he leads a centering prayer group, preaches, baptizes, performs marriages, and conducts funerals.

Grandson of Frances Berry, Martha Berry’s sister, Robert McKeon was born in New York City in 1932 and was baptized at Saint Patrick Cathedral on March 21st. In his early teens his inner voice told him to envision careers that would make the world a slightly better place to live in. He said yes and set out for a career of teaching.

Bob graduated from Princeton in 1956 and Cal Tech in 1957 after studying engineering. In 1960 he earned a Bachelor of Philosophy degree from the University of Montreal and subsequently a Licentia in Philosophy from the Catholic institute of Paris. After earning a doctorate in the History of Science from the Sorbonne and following his calling, Bob taught at Princeton, Tufts, and Babson College. He spent almost 25 years at Babson where he taught liberal arts and business ethics.

Bob and his wife Véronique will be celebrating their 50th wedding anniversary this summer with their 4 children and 6 grandchildren. His favorite pastime besides holidaying with family is cross-country skiing above the Arctic Circle in Lapland. Some 35 years of centering prayer and his loving spouse foster the working of the Holy Spirit in his ministry and inner life.