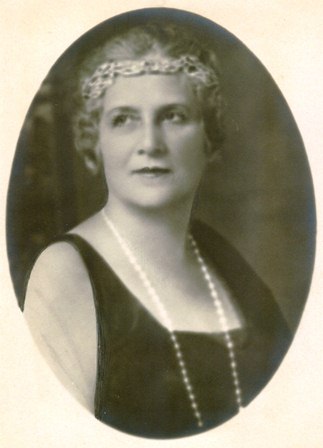 The oldest daughter of Thomas and Frances Rhea Berry, Jennie Enfield Berry was born in Etowah County, Alabama in 1861 and grew up at the family home Oak Hill, near Rome, Georgia. Because she traveled and studied in Europe with family friends, Jennie was referred to as “that foreign Berry girl”.

Jennie returned to the U.S. after living in Europe and married Henry Bruton of Nashville, Tennessee on May 7, 1889. Bruton, a tobacco manufacturer, passed away in 1892, when Jennie was still in her early thirties. Her significant inheritance enabled her to resume European travel. In 1901, when she was 40, Don Enrico Ruspoli, the 23-year old second son of Prince Luigi Ruspoli, followed her to Georgia to ask her to marry him. Their wedding vows were heard in Washington, D.C. by the Papal Nuncio, and she returned with Enrico to live in Rome, Italy.

Upon marrying Enrico, Jennie changed her name to Eugenia, a popular name at that time, meaning well-born, of noble descent. With funds supplied by Eugenia, the couple purchased historic Castle Nemi from the Orsini family, 20 miles south of Rome, Italy. Enrico died in 1909, after eight years of marriage. Eugenia and Enrico had a verbal agreement that upon his death, she would retain possession of the historic castle, but in his will Enrico left most of his property, including the castle, to his family. Much litigation ensued concerning the title to the castle; in a 1916 agreement, Eugenia obtained title together with all the personal property therein.

Eugenia returned to the U.S. after Enrico’s death and although she continued to travel widely, made her home in New York City. In 1929, Eugenia adopted a young British girl, Maria-Theresa. The antique furniture, paintings and sculpture from Castle Nemi that Eugenia shipped at the outbreak of World War II to her sister, Martha Berry, are now part of the collection at The Martha Berry Museum.

Eugenia passed away in her home in New York City in 1951.