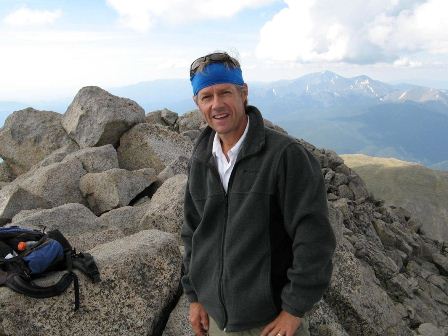 Clay Bonnyman Evans was born and raised in Colorado. His self-described checkered college career was interrupted by a six-and-a-half year stint working as a cowboy around the American West, an experience he documented in his 1999 memoir, I See By Your Outfit. He eventually graduated from the University of California Santa Cruz and spent a quarter century working in journalism, including at the Los Angeles Times. He has been widely published as a freelance writer and also published a book for children, The Winter Witch.

Clay is currently is working on a book about his grandfather, Alexander Bonnyman Jr. and works in communications for the University of Colorado Boulder, and as a freelance writer. Clay is an avid mountain climber. Colorado has 54 peaks over 14,000 feet nicknamed “fourteeners”. The photo is of Clay on the peak of Mount Shavano. He has successfully climbed 30 of them and he hopes to climb many more!