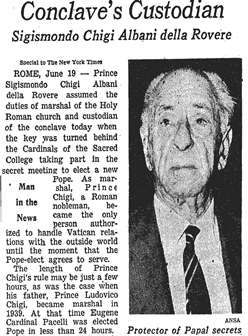 Prince Sigismondo Chigi (1894–1982) was the last Hereditary Marshal of the Holy Roman Church, serving both in 1958 and 1961.  He married Marian Berry in Rome, Italy in 1928. Marian was the daughter of Martha Berry’s brother, Ike.  Since 1712, the first born son of the Chigi family held the important role of Custodian of the Conclave and Marshal of the Holy Roman Church, with the delicate duty of watching over the College of Cardinals during the conclave meetings (electing a new pope). The office was abolished by Pope Paul VI in 1968.

The Chigis had two children, Francesca and Agostino. Today Principessa Francesca Chigi della Rovere still lives in Rome, Italy and writes of her lovely memories of Oak Hill where she visited her Aunt Laura Campbell and her cousin, Virginia Campbell Courts.  Francesca hopes to show Oak Hill to her daughter, Isabel someday.