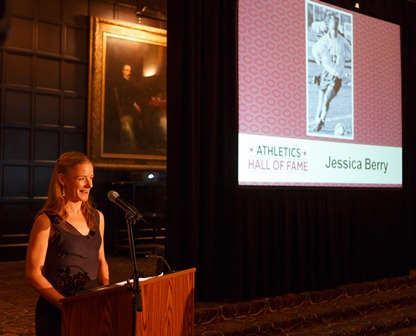 Jessica Berry was inducted into the University of Chicago Athletic Hall of Fame in 2012.

The second-leading women’s soccer goal scorer (40) in school history, Berry earned inclusion on the NCAA All-Tournament Team in 1996 and capped her career with selection as a women's soccer All-American and the University Athletic Association Player of the Year in 1999.

Jessica is a Staff Attorney for the Children’s Law Center of Massachusetts, where she focuses on representing adolescents in child welfare, education, and mental health matters. She joined the CLCM in September, 2009 as recipient of a Skadden Fellowship. Jessica earned her B.A. from the University of Chicago, graduated magna cum laude from the University of Michigan Law School, and has an M.S.W. from the University of Michigan School of Social Work. Following law school, Jessica clerked for the Honorable Nathaniel M. Gorton of the United States District Court for the District of Massachusetts, and then for the Honorable Diana Gribbon Motz of the United States Court of Appeals for the Fourth Circuit.