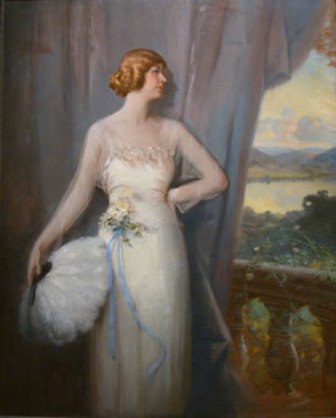 Ellen McClung was born in 1894, the great-great granddaughter of Knoxville founder James White and great-granddaughter of Charles McClung, who helped write Tennessee’s first constitution. As a girl she traveled abroad extensively with her parents, became expert about Italian arts and architecture, studied European fashion, and wore gowns from the couturiers of Rome and Paris. In 1928, Ellen married coal magnate Thomas Huntingdon Berry of Rome, Georgia. In 1932, when Ellen was 38, she and Thomas became parents of their only child, Hugh Lawson McClung Berry.

In 1936, with the death of her father, the family moved into Ellen’s childhood home to care for her mother, Ella Gibbins McClung. They continued to socialize and travel and Hugh entered the elite Connecticut prep school Groton.

On February 28, 1951, while the family was taking its annual vacation to Palm Beach, Hugh Berry shot his grandmother (who died of her wounds on March 9, 1951) and father with a shotgun. He also shot a policeman while trying to escape. He was eventually captured, and after a medical examination was ruled insane. His mother believed that his problems had begun when he suffered a head injury three years earlier and agreed to have him committed to a mental health facility in Chicago. Hugh was eventually released and died from pneumonia and complications in Guadalajara, Mexico in 1963.

After the shooting, Thomas and Ellen involved themselves with a number of historic preservation causes. They purchased and restored Fairfax, built about 1840, and Ellen donated property to the University of Tennessee to build a plaza in honor of her parents. In 1977, the Berrys built a small retirement home, called Berrymount. When Thomas died the next year, Ellen retreated to Berrymount with her housekeeper and a companion, Dan Tondevold, a mysterious man she and Thomas had befriended because of his resemblance to Hugh.

After Thomas’s death, Tondevold moved into Berrymount's guest house under the pretext of writing a book. He eventually took over the management of the estate and was granted power of attorney in 1982. In 1985, Ellen, her housekeeper, and Tondevold went to Charleston on vacation. When it came time to return to Berrymount, Tondevold suggested Ellen and the companion fly home; he would drive, bringing Ellen’s jewelry and furs. When Ellen reached home, she found the lights and telephone disconnected, valuable antiques missing, her checking and savings accounts liquidated.

An episode of Robert Stack’s Unsolved Mysteries revealed other details of the story. The program reported that some weeks later a body washed up on a South Carolina beach with a bullet wound to the head and an antique pistol that had belonged to Ellen nearby. There was no identification on the body but a wallet was found containing Ellen’s credit cards. Too badly decomposed for positive identification but presumed to be Tondevold, the body was cremated according to instructions in a suicide note found in Tondevold’s living quarters. Suspicion grew when it was discovered that Tondevold had previousl placed an ad in a Charleston paper for a houseman-chauffeur. Many believe that Tondevold fled and was living in Europe, the Caribbean, or South America.

Ellen moved into a small apartment in Jefferson City, Tennessee, where she lived modestly on the proceeds of the land she had donated to the University of Tennessee. She died in 1992 at age 98.

portrait from the Knoxville Museum of Art