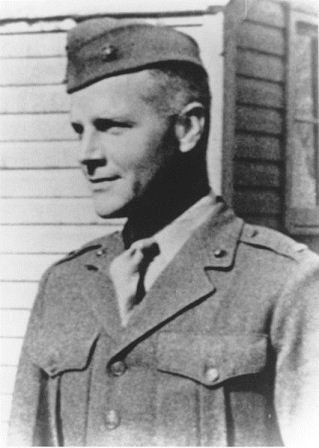 Lieutenant Alexander “Sandy” Bonnyman Jr. was a US Marine Corps officer killed in action at Betio, Tarawa during World War II. A combat engineer, he was posthumously awarded the Medal of Honor for his actions during the Battle of Tarawa.

Born on May 2, 1910, in Atlanta, Georgia, Sandy's family moved to Knoxville, Tennessee, when he was a baby. His father was the president of Knoxville's Blue Diamond Coal Company.

Sandy attended Princeton University where he studied engineering and lettered in football. Dropping out of college after his sophomore year, Sandy entered the Army Air Corps as a Flying Cadet in June 1932. But he lasted only three months and was honorably discharged for “flying deficiency.”

During his time as a cadet he and Josephine Bell of San Antonio met; they married in February 1933, while Sandy was working for his father in the coal-mining business. In 1938 he acquired his own copper mine on the eastern plains of New Mexico and moved his growing family, which by 1941 included three daughters.

At the outbreak of the war, Sandy was exempt from any military obligation due to his age, had a wife and three daughters, and owned a company that produced material vital to the war effort. Nevertheless, inspired by the news of Pearl Harbor, he enlisted in the U.S. Marine Corps as a private and distinguished himself at the Battle of Guadalcanal. In February 1943 received a battlefield commission to the rank of second lieutenant in recognition of his exceptional leadership skills. In September 1943 he received a commission to the rank of first lieutenant.

Betio Island in the Tarawa Atoll of the Gilbert Islands was initially attacked by three U.S. Marine battalions on November 20, 1943. By nightfall 1,500 marines had been killed or wounded, and the outcome of this critical battle was in serious doubt. During the second day, reinforcements of men and supplies slowly began to change the outcome of the battle and by dawn of the third day, the key to victory lay in the elimination of a massive concrete bombproof shelter that had halted the Marine advance.

As executive officer of a shore party, Sandy did not have direct combat responsibility. Nonetheless, he took on a leadership role in the chaos, on the first day of battle assembling and leading an ad hoc assault team to the beach. On the second day he led his demolitions teams in an assault on bombproof shelter, about forty yards forward of the Marine lines. His attack gained the top of the structure, flushing more than 100 Japanese soldiers into the open. Positioned at the leading edge of the assault, Sandy killed several attackers before he fell mortally wounded. Betio was declared secured on the same day. For his actions during the battle, Sandy was posthumously awarded the Medal of Honor in 1947. His 12-year-old daughter, Frances, accepted the medal on behalf of the family.

For decades, the whereabouts of the remains of hundreds of Marines killed at Tarawa have been unknown. In November 2008 researchers from the volunteer organization History Flight reported that they had determined the location on Tarawa of the remains of 139 of the U.S. Marines whose bodies never were found, potentially including those of Sandy Bonnyman.